A Fresh Look at Those the WEP Affects, Proposals to Change it 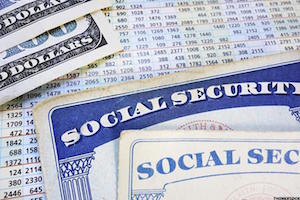 The Congressional Research Service (CRS) has released an updated version of its report concerning the Windfall Elimination Provision (WEP) and the Government Pension Offset (GPO). It includes discussion of bills that would affect both.

The CRS report “Social Security: The Windfall Elimination Provision (WEP),” concerns the WEP and the GPO—benefit formulas that reduce Social Security benefits for workers and their eligible family members if the worker receives (or is entitled to) a pension based on earnings from employment not covered by Social Security.  About the WEP

However, the formula does not differentiate between those who worked in low-paid jobs throughout their careers and other workers who appear to have been low paid because they worked many years in jobs not covered by Social Security and few years in covered jobs. Under the old law, workers who were employed for only a portion of their careers in jobs covered by Social Security—even highly paid ones—also received the advantage of the weighted formula, because their few years of covered earnings were averaged over their entire working career to determine the average covered earnings on which their Social Security benefits were based.

The WEP is intended to remove an unintended advantage that the regular formula provides to certain retired or disabled worker-beneficiaries who were also entitled to pension benefits based on earnings from jobs not subject to the Social Security payroll tax. It is intended to place affected workers in approximately the same position they would have been in had all their earnings been covered by Social Security.

Those the WEP Affects, by the Numbers

The CRS reports that by December 2021, approximately 2 million people (or about 3% of all Social Security beneficiaries) were affected by the WEP. Those workers mainly include state and local government employees covered by alternative staff-retirement systems, as well as most permanent civilian federal employees hired before Jan. 1, 1984, who are covered by the Civil Service Retirement System (CSRS).

Number of Social Security Beneficiaries in Current Payment Status with Benefits Affected by the WEP, by Type of Beneficiary, December 2021

Number of Social Security Beneficiaries in Current Payment Status with Benefits Affected by the WEP, by Type of Beneficiary and Gender, December 2021

The report includes information concerning bills before chambers of Congress that would affect the formulae. Following is a look at bills introduced in the House and Senate in the 117th Congress, which convened in January 2021 and will end in January 2023.

On Jan. 4, 2021, Rep. Rodney Davis (D-IL) introduced H.R. 82, the House version of the Social Security Fairness Act of 2021. The bill would amend title II of the Social Security Act to eliminate the WEP and the GPO; it also would repeal provisions that reduce Social Security benefits for individuals who receive other benefits, such as a pension from a state or local government. These changes would be effective for benefits payable after December 2021. On April 22, 2021, Sen. Sherrod Brown (D-OH) introduced S. 1302, the Senate companion to H.R. 82.  H.R. 82 was referred to the House Ways and Means Committee, which has not taken action on it yet.; S. 1302 was referred to the Senate Finance Committee, which likewise has not acted.

On April 1, 2021, Rep. Richard Neal (D-MA), Chairman of the House Ways and Means Committee, introduced H.R. 2337, the Public Servants Protection and Fairness Act.  The legislation would:

replace the WEP with the new proportional formula for individuals who become eligible for OASDI benefits in 2023 or later;

The bill would apply to individuals who:

The bill was referred to the House Ways and Means Committee, which sent it to its Subcommittee on Social Security, which has not taken action yet.

In 2021, the Social Security Administration’s (SSA) Office of the Chief Actuary (OCACT) estimated that the bill would increase program expenditures by about $30.6 billion (mainly from the rebate) between 2021 and 2030, which would be reimbursed from the General Fund of the U.S. Treasury. In the long run—which it defines as 75 years—the OCACT says that the projected program cost would increase by an amount equal to 0.02% of taxable payroll, and the projected program income would increase by the same amount with transfers from the General Fund.

SSA Chief Actuary Stephen C. Goss in a letter to Neal responding to the Chairman’s request for information about the financial effects on the Social Security Trust Funds of the Public Servants Protection and Fairness Act of 2021, wrote that “Over the long-range 75-year period, we estimate that enactment of the bill would increase OASDI program cost and program income each by 0.02 percent of taxable payroll, thus having no significant effect on the OASDI actuarial balance.” Wellbeing for Every Public Servant Act of 2021

On Nov. 3, 2021, Rep. Kevin Brady (R-TX) introduced H.R. 5834, the Equal Treatment of Public Servants Act of 2021, which would allow individuals becoming eligible during the transitional period between 2023 and 2061 to receive the higher of their benefit under the current-law WEP or the proportional formula. For those who become eligible in 2062 and later, benefits would be based solely on the proportional formula. The bill also would provide a rebate payment starting nine months after enactment for workers (up to $100 per month) and their dependents (up to $50 per month) affected by the current WEP. The rebate payments would increase with cost-of-living adjustments.

The bill was referred to the House Ways and Means Committee, which sent it to its Subcommittee on Social Security, which has not taken action yet.  In 2021, OCACT estimated that the legislation would increase program costs by about $27.7 billion (or $26.3 billion net of the revenue from the income taxation on benefits) over the period 2022-2031. The OCACT estimates that over the 75-year projection period, future savings from the proportional formula would offset the cost of the monthly rebate payments and the protection provision during the transitional period, so the bill would have no significant effect on Social Security’s long-term financial outlook.